Bert’s Plug Load Solution for “Everything Else” in the Building

Plug loads run 24/7 because they are not managed or controlled. Buildings waste money powering devices in empty buildings. Bert’s plug load management solution uses the existing wireless network to turn devices off when buildings are empty. At the same time, Bert collects and stores real-time granular device, measurement and temperature data for increased efficiency and comfort. As a result, building operators save money and gain valuable insight into building operations. Bert can either be installed as a standalone solution or integrated into the existing BAS. 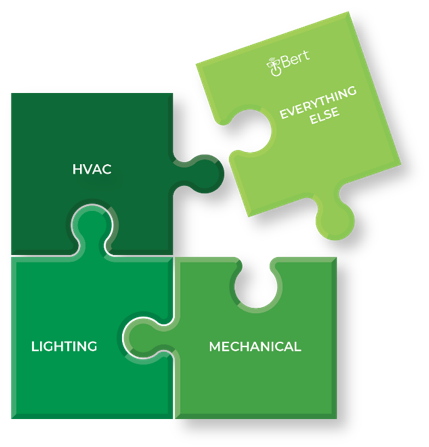 Bert collects baseline measurement data from loads each device after the plug load control hardware is installed.  The data is analyzed to determine average standby loads and energy usage patterns for various devices.

How Much Energy Do Plug Loads Use Each Year?

To put plug loads into context:

According to the Department of Energy, devices with non-traditional end uses consumed over 7 quadrillion BTU in 2012. That’s a big number.  In fact, it’s equivalent to the amount of dynamite needed to carve Mount Rushmore 135,800,000 times, according to the Department of Energy’s Direct Currents Energy Unit Calculator .  The calculator uses alternative energy units to make energy consumption easier to understand.

The Energy Information Administration Annual Energy Outlook (AEO) 2015 forecasts that primary energy consumption from plug loads will grow 27% from 2016 to 2030 and the contribution of these loads to total building energy consumption increases from 36% in 2016, to 43% in 2030 under its business-as-usual scenario.

Standby or overnight loads associated with MELs account for more than 100 billion kWh and $ 11 billion in annual energy costs in the United States alone, according to Energy Star®. In case you’re wondering – that’s the same amount of energy needed for 6,116 Moon Landings.